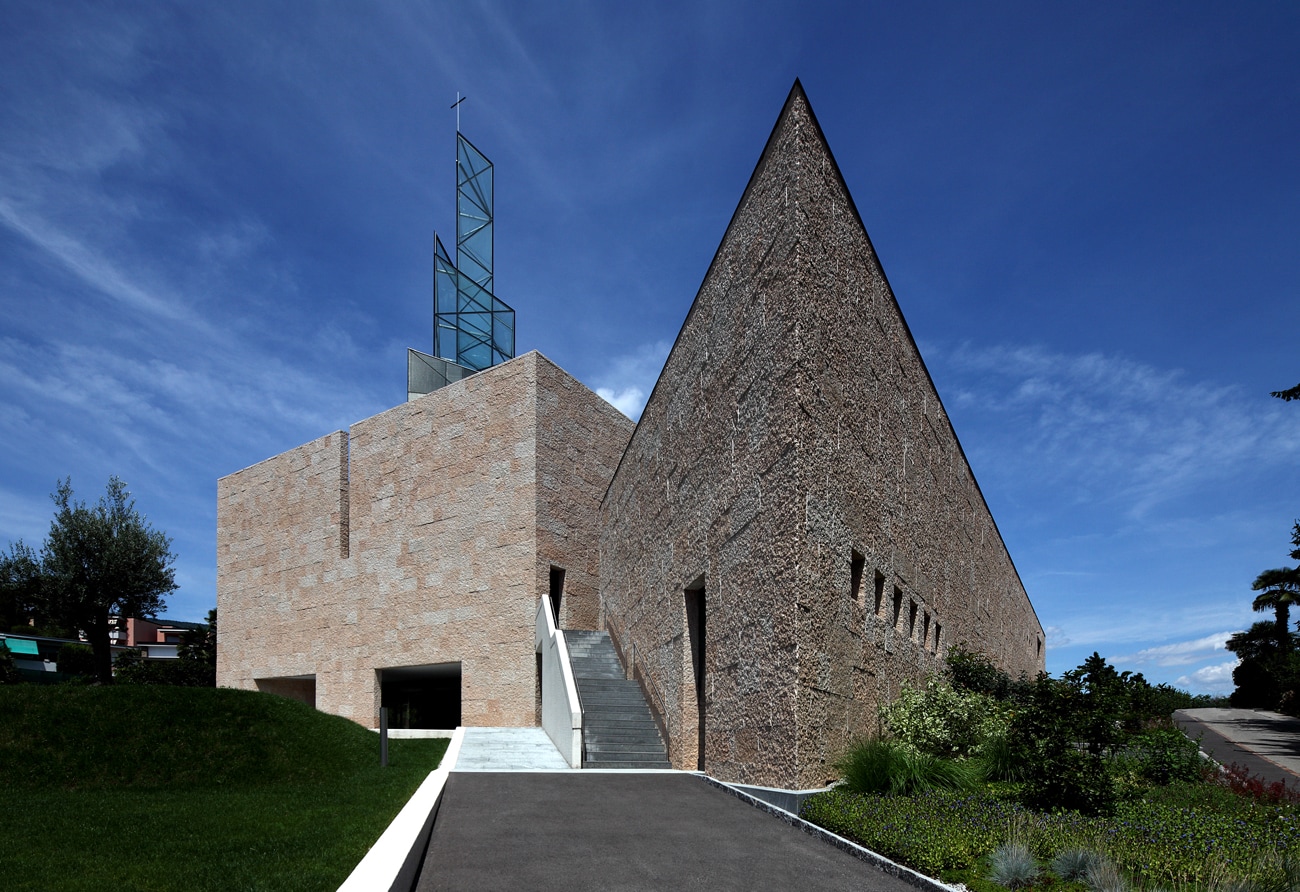 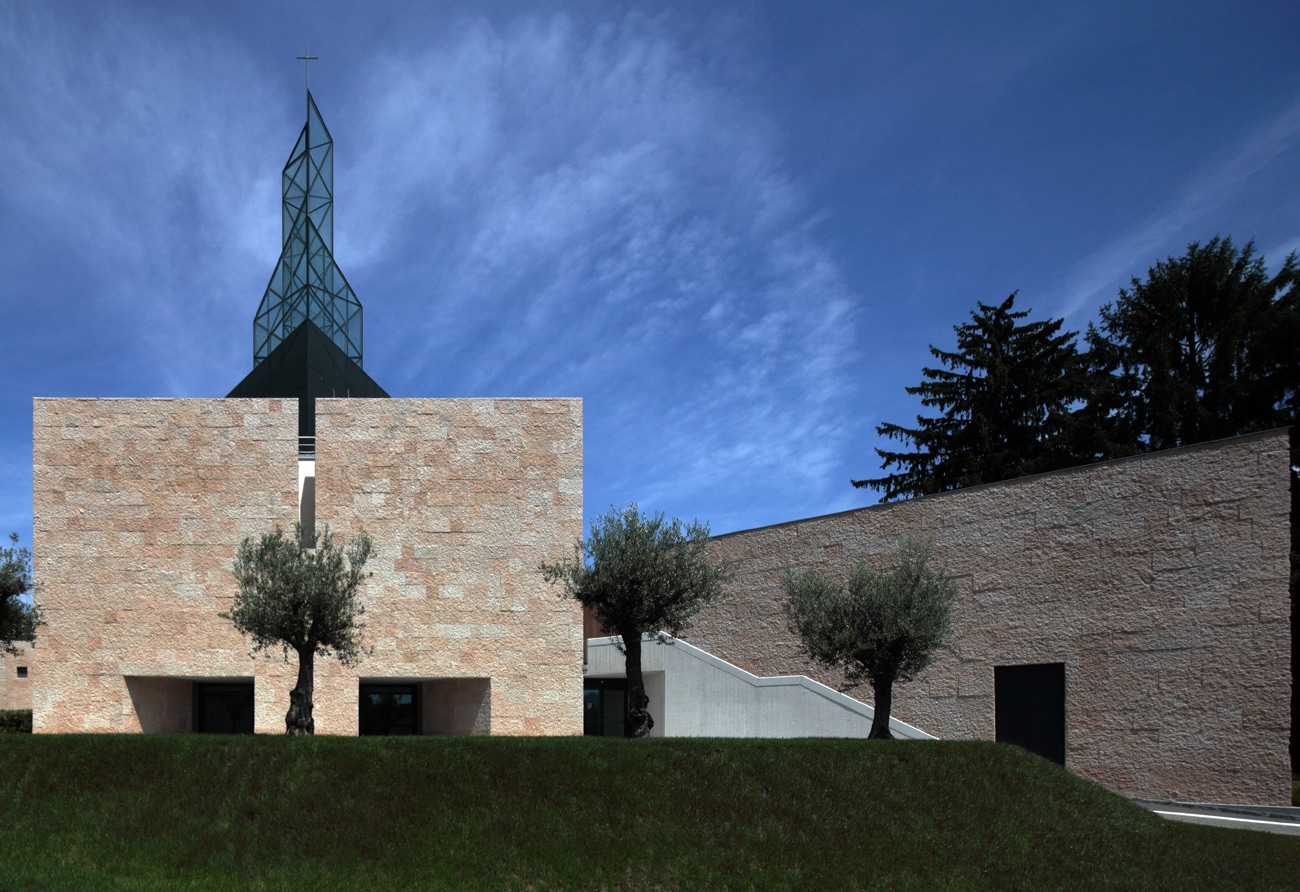 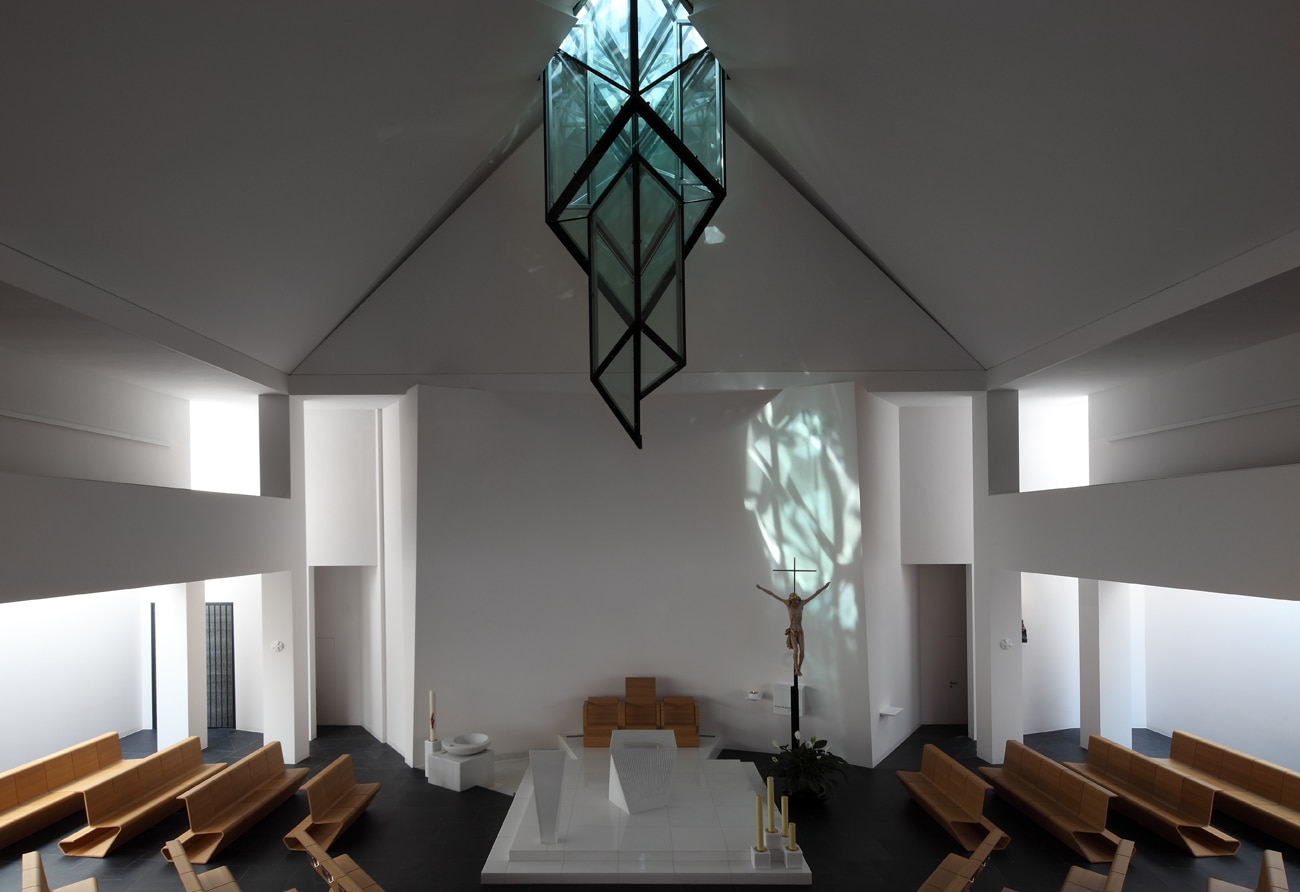 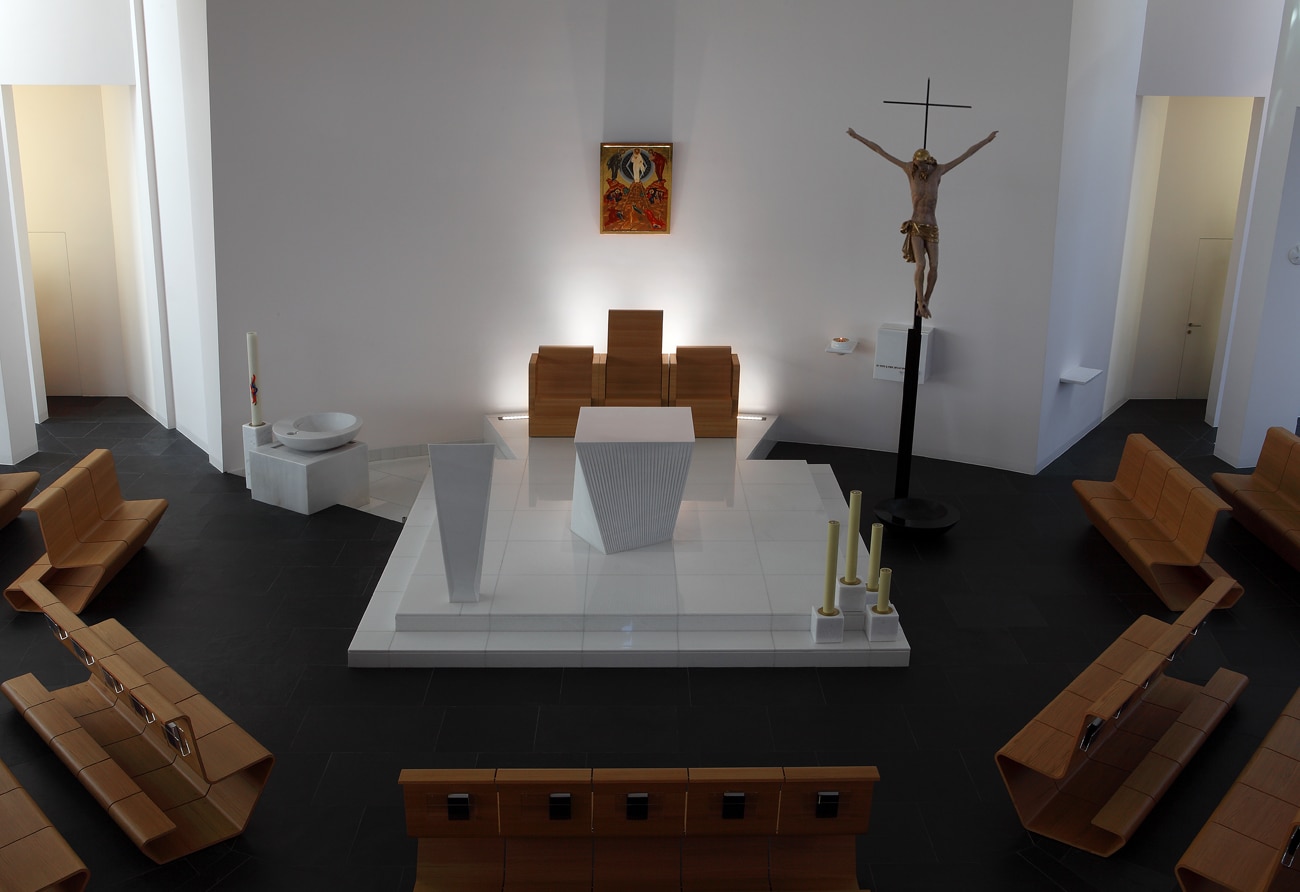 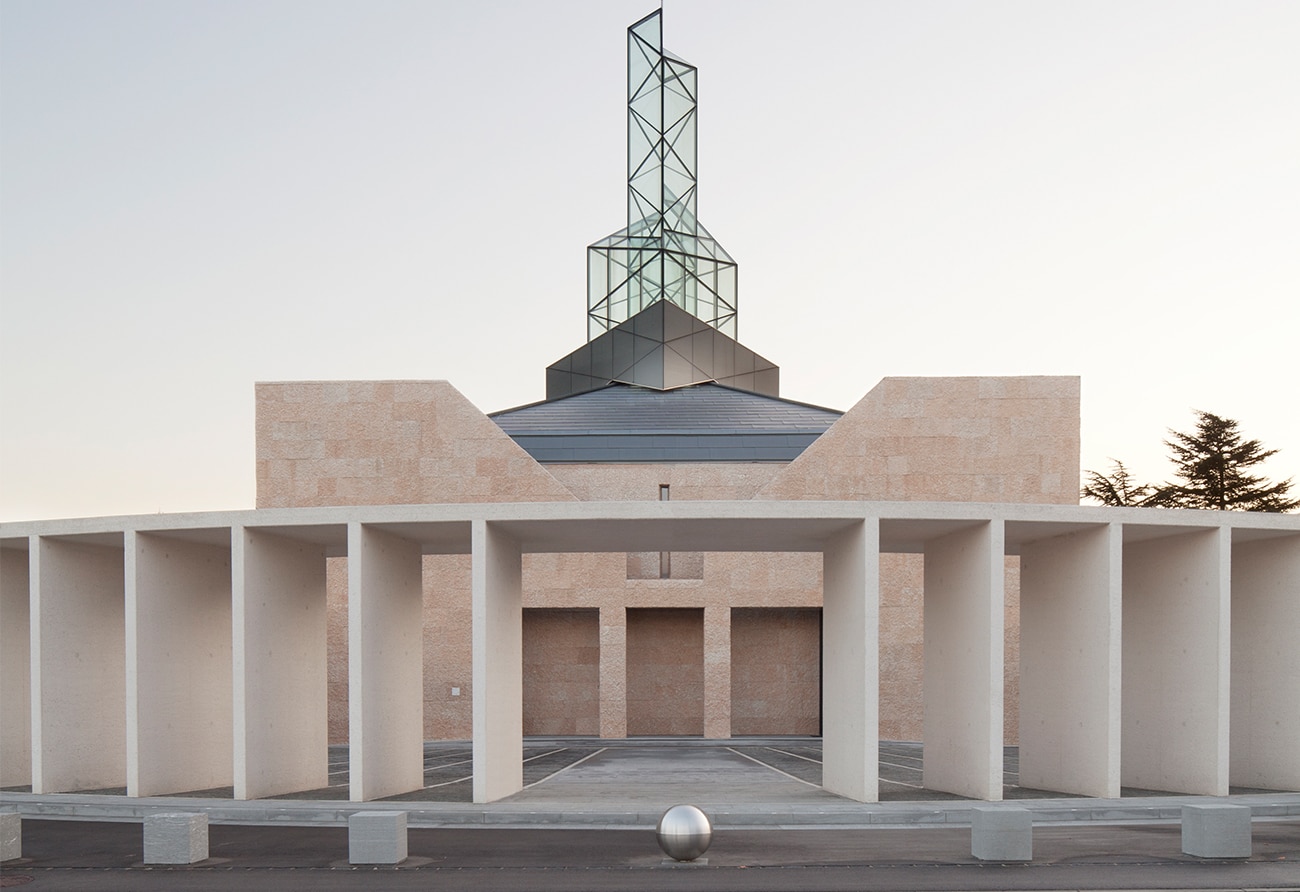 Twenty years in the planning, this centre brings together all the activities of parish life and has evolved into a landmark and social gathering place for the community. Located near the kindergarten and elementary school as well as the City Hall, the complex is a lively new addition to the institutional centre of the town. Camponovo’s most significant design choice was to give the church its square ground plan, so that, among other things, the interior geometry too reflects this shape. The square is a geometric symbol that expresses man’s orientation in space and in his earthly existence. It involves a principle of order that seems to be innate in human beings and which, in a dualistic system, can be opposed to the circle, which represents the celestial powers. Thus, the squaring of the circle symbolizes man’s desire to reconcile the “earthly” and the “celestial”, to bring them into an ideal harmony. Another symbolic aspect of the project design is the analogy between its geometry and the oldest Christological monogram that recalls the cross and unites the circle and the square as a sign of synthesis and proportion.The sense of contemplation and protection generated by the square plan is intensified by the two geometric constructions that constitute the inner and outer shell of the Church. The external one is monumental, made with natural cleft Lessinia stone, while the interior shell is thinner and lighter. It is designed to converge at the altar, around which the congregation sits in a semi-circle intentionally designed without strict separations, in deference to the most authentic principles of liturgical group participation. Starting from the square base, the white marble block is illuminated from above by light that enters through the spire and points down onto the altar.The marble rises up and twists in a continual transfiguration of form, accentuated by an incision that makes the whole block pulsate. An even, soft light descends along the walls through skylights placed in the interstices between the inner and outer shells, providing a natural light that seems to enlarge the interior space. Otherwise, as mentioned previously, the room is entirely enclosed, except for the area above the altar, where the light is modulated by a glass structure, which, conceptually speaking, opens the church to the heavens. All of the furnishings of the presbytery behind the altar are designed by the architect himself, the pulpit, the baptismal font and the Tabernacle. The unusual composite wood benches curve in a single unbroken line, resulting in a shape that provides a place for Bibles, coats and bags so the congregation can follow the mass comfortably. On the outside, the churchyard serves not only as the hub of the various parish functions but also as a veritable filter between the sacred and the profane. To enter, one passes between the twelve marble panels in Camponovo’s adaptation of the traditional symbolism of the twelve Apostles, an entrance that adds to the vibrant effect of a building in continual transformation. To the sides, porticoes create the physical connection with the other facilities of the parish complex – a multi-function hall, a meeting room and the rectory. The church of the Transfigurazione del Signore was consecrated by the bishop of Lugano, Monsignor Grampa on 28th february 2010). 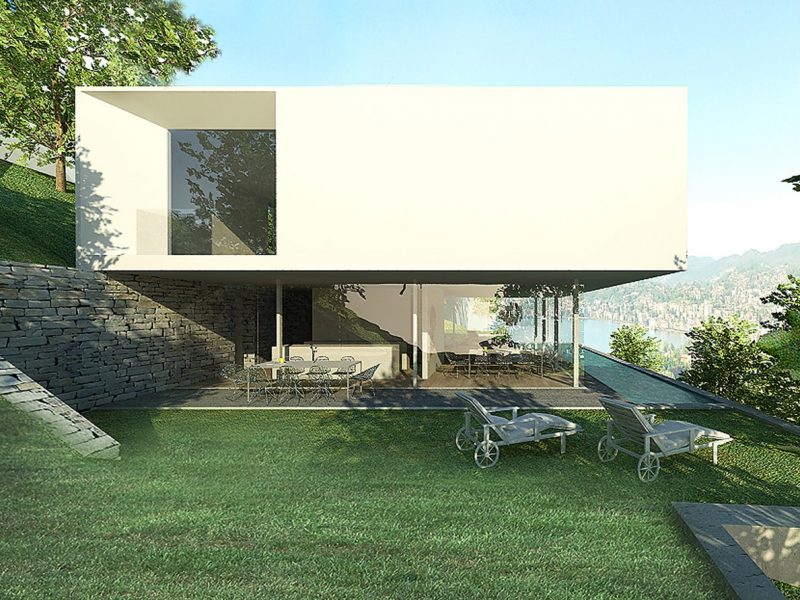 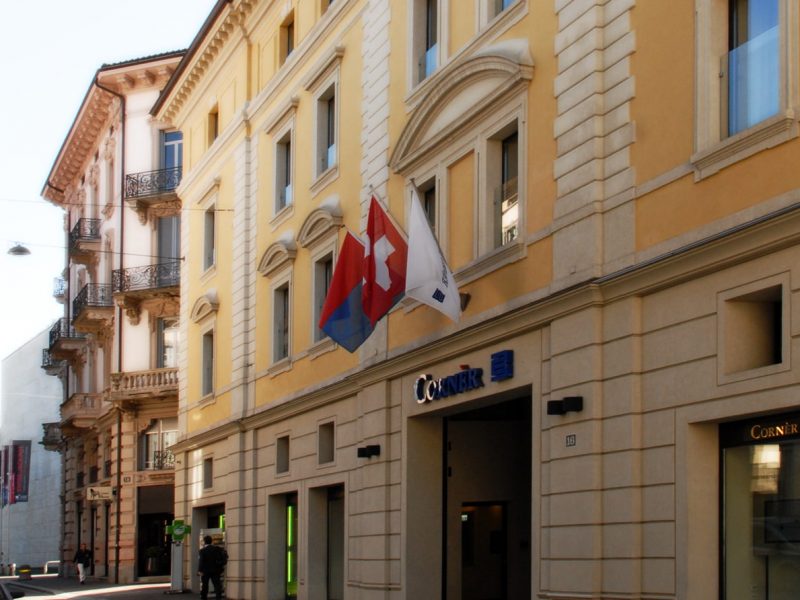 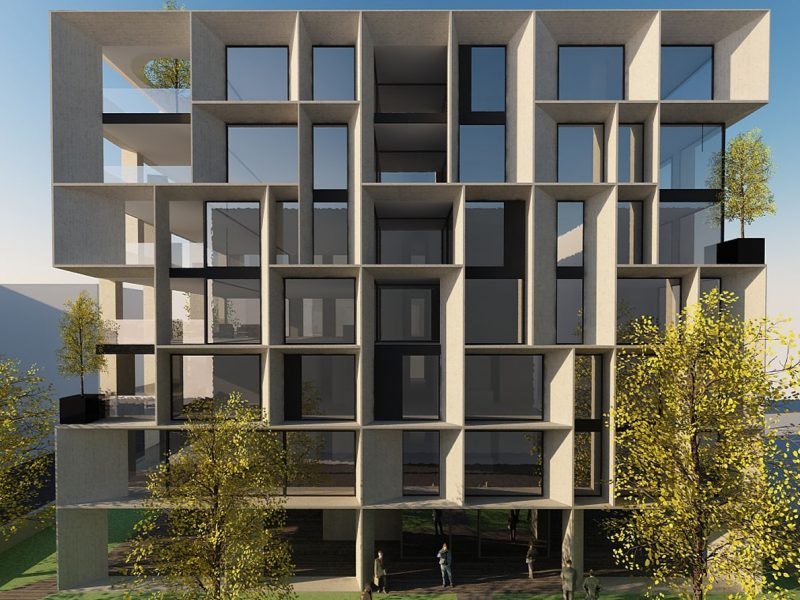